Brighton, 5 stars and "One Woman" anxiety

It's been a short while since my last post so here's what's been happening:

I premiered "Jewel" at Brighton Fringe last week and am just about finding my land legs again.
The lead up to and reality of Brighton was a long, hard and somewhat lonesome slog, so I was over the moon and tripping balls when, on the last day of the festival I received an amazing five star review courtesy of FringeGuru's Mathilda Gregory.

It's the first time I've had no-one to share that very specific kind of anxiety / excitement with: the kind you get just before stepping on stage.

I had a couple of very supportive friends come down to Brighton with me.  They made a huge effort for me and tried to encourage me to let loose and milk all the characters and the comedy as much as possible.  But carrying a show by yourself for the first time is a huge challenge.  It's hard to evoke that same sense of abandon with your characters / performance that you have when playing a part in an ensemble piece because you (or at least I was) are looking out into the audience and analysing every face you see ten times more than usual because they are judging YOUR show by YOU and ONLY YOU -  and what if they're bored and cursing the hour of their lives they'll never get back, thanks to YOU?!
Also, I found myself - sometimes even when standing in front of the audience in character - thinking about popular feelings re one woman shows in general...what do people think when they hear 'one woman show' - do they imagine a big old vagina monologue that they can't escape from?! Is part of my purpose this evening to prove that I'm not about to do a vagina monologue?! There's nothing wrong with vagina monologues at all - and a lot that's right with them - but you see where I'm coming from re that kind of neuroses?! I wonder if other solo female performers ever feel that same anxiety...? anyway, I'm mildly hungover so I won't attempt to write an essay on women in performance just at the moment..!!

To conclude: in spite of all these first-time issues, I'm extremely happy with the eventual outcome and looking forward to taking Jewel back to the drawing board in preparation for my London and Edinburgh shows.  Having done it and done well has given me the self belief to take the big, pregnant cow that is Jewel back to the farm and milk her.  I'll be looking for ways to make the show and characters weirder, darker, slicker and more indulgent than ever before...so watch this space! And in the meantime, here are some photos of the performance courtesy of the skillful Jemima Yong

Also, the show was filmed by Sarah Gray - footage to follow soon :) 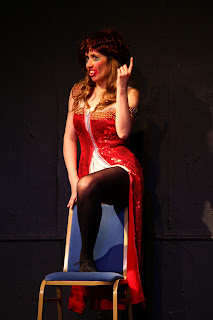 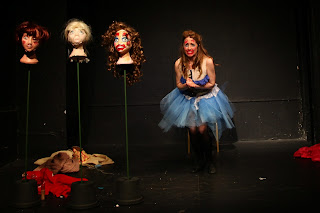 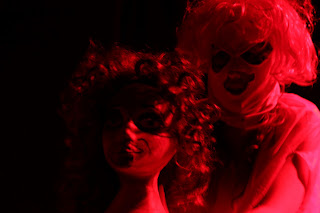 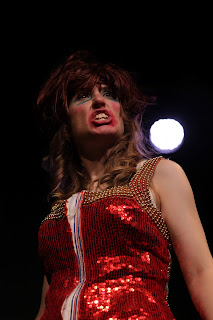 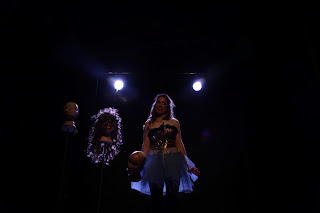 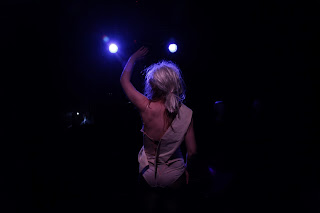 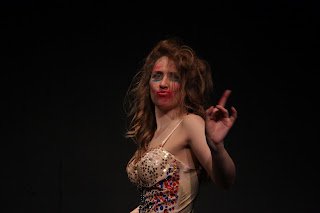 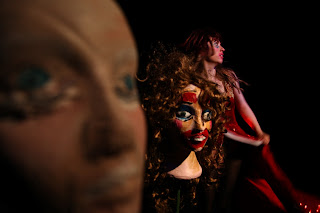 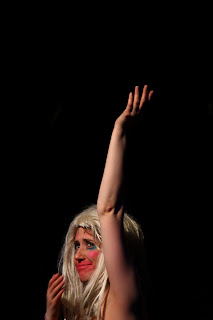 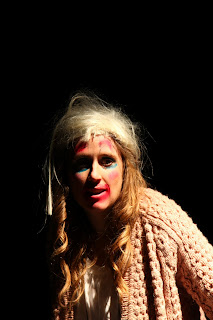 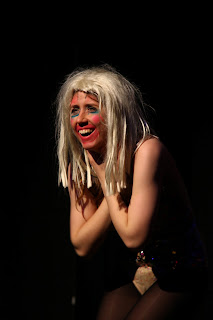 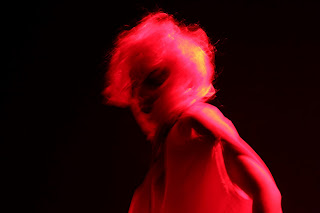 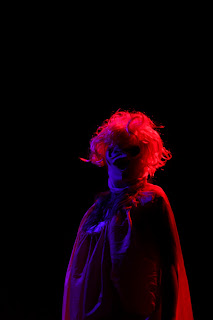 Posted by Claudia Jefferies at 02:37 No comments:


Posted by Claudia Jefferies at 12:21 No comments:

OOh, and I found this.  Deriving much inspiration for Grandma Diamond's talent routine.
Posted by Claudia Jefferies at 09:39 No comments: 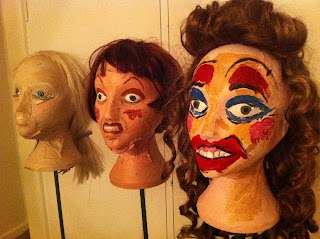 O-M GOD, IT'S LESS THAN FOUR WEEKS UNTIL I PERFORM JEWEL FOR THE FIRST TIME.  And I'm very scared.  And excited.  And I just started three sentences with 'And'.

The show is so weird, I love it...but it needs to be the right amount of weird at exactly the right moments...and also funny and touching and exciting and entrancing and memorable and there actually need to be people sitting on the seats in the auditorium if any of these things are going to be possible...

But its all starting to feel a bit more real now, especially since picking up costumes from the multi-skilled art wizard, Lucy Foakes.  Check it! 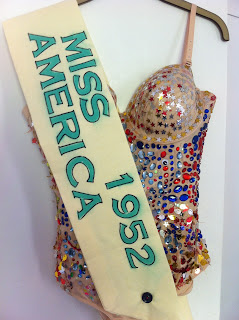 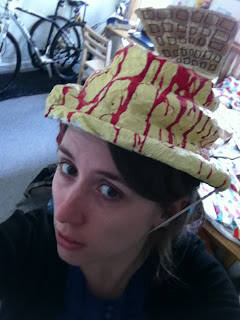 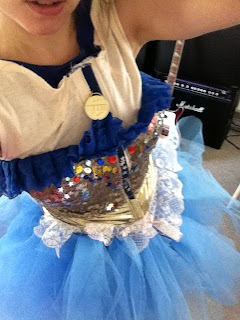 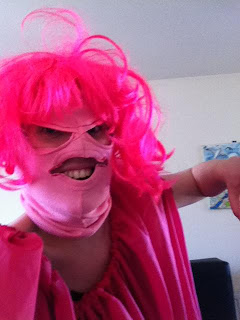 Posted by Claudia Jefferies at 06:32 No comments:

So, as it may or may not be clear from previous posts and videos, there is a giant prawn in my show.  A chaotic, unruly pink individual with jaunty movements and gurgling screeches, tempered with slow and deliberate flashes of wide-eyed staring and low, breathy cackles.

The physical essence of the prawn - in terms of its sound and movement - was born in a clowning workshop with the wonderful Peta Lily.  She'd get us all warmed up and then say something like "...ok, going around the room with movement and sound like.. asparagus!", and we'd just have to respond without thinking.  One time she said "...prawn" and the rest is history.  But today, in the shower, I started to think about how I've developed the prawn and the role I've given it within the show: the prawn is meddlesome, unnerving and unpredictable.  It possesses the other characters (mostly Jewel), taking over from them on stage, often  when they need it least, messing with their stuff and mercilessly ridicules them.  It became clear to me, without too much effort, that the prawn respresents the madness behind the order and regiment of beauty pageants (albeit in quite an abstract way, but hey, that's the style of the show); the idea  that something is not quite right.

Anyway, I suddenly realised what it reminded me of: a recurring, lucid dream I have about a chaotic monster.  A very specific kind of chaotic monster: one that feeds on fear.  It usually has a very sketchy, wiry outline, usually comprised of matted fur and nasty claws with wild, soul-devouring eyes.  I'm pretty accomplished at lucid dreaming, so I usually see the beast and instantly know that it represents the darkness in my soul and that I should show no fear - just grab it and laugh into its eyes (at the risk of my soul).  This is precisely what I did last time, when it appeared in the form of a horrible cat that flew at and subsequently attached itself to my face with its gnarly claws.  I grabbed its head, stared into its portal-to-hell eyes and said "F^*K YOU!! F^*K YOU!!" to which it replied "YEEEEESSSSSSSS! F**K ME!!" Well, that was an eye opener.

So...to take away? Not a lot really, just me observing a connection.  But, perhaps, the idea that, no matter what form our creations take as artists, we're ultimately just working out / becoming better acquainted with our own issues: presenting them on a stage for the whole world to see so that they scare us less / start to make more sense.  Hardly an original idea, I know, but one that I find fascinating nonetheless.
Posted by Claudia Jefferies at 14:00 No comments:

Just finished editing a teaser video for Jewel.  Watch as Jewel, Pearl and Diamond garble, spit and vomit out some practice answers to Miss World style questions.
Posted by Claudia Jefferies at 07:10 No comments:

My name is Claudia.  I'm a London based performer and writer, specialising in Physical Theatre, comedy and devised work.

I'm currently in the process of devising my first solo show, Jewel - a a grotesque comedy show inspired by beauty pageant culture - which I will be performing at Brighton and Edinburgh Fringe Festivals this summer.  I play five different characters, three of which are a daughter, mother and grandmother viciously competing in the same crucial pageant.  The show is self-produced and directed (with the odd bit of feedback from friends and family) and so, as a fringe novice, I'm throwing myself very much in at the deep end, partly to test my own capabilities, but mostly due to poverty.  It will be, and is being, a huge learning curve.

I've set up this blog especially to document the show and the devising process.

It all started when I was idly flipping about on YouTube and came across a reality show about child beauty pageants in the U.S (which I won't name).  Beauty pageants naturally appeal to me (in a 'wow, how fascinatingly grotesque' way) and my love of campness and excess.

But there was more to it than that; there's something ugly about beauty pageants.  They allow the sexual objectification of women and girls to take place in a very controlled environment, in which the parading and pitting against one another of contestants is carried out under the guise of admiration, respect and investment in young womens' futures.

The Miss World, Miss Universe and Miss America pageants all started out, essentially, as swimwear modelling events, back in the early to mid 20th century, growing in popularity with the advent of television.  Men behind desks scored bikini-clad hopefuls on their Vital Statistics in contests that pandered to the male gaze, in the name of entertainment. The later addition of things like Final Questions and Talent portions were, arguably, nothing more than reactionary measures designed to calm the wayward tits of the women's lib movement.

Don't get me wrong, I'm all for charity and scholarships and self betterment and all that, but that's  precisely why I'm uncomfortable with those things being associated with beauty contests.  What the title of Miss World / Miss Universe / Miss Earth / Whatever ultimately says to me is: "Female deemed most suitable to waft gracefully around the planet, giggling in a charming yet suitably restrained manner, shaking hands with 'important' men and doing bits of charity, all the while perspiring feminity like a fine, entrancing mist".  That the face of such humanitarian deeds should be so - frankly -
un-human (and by un-human I mean unrepresentative of humanity as a whole and solely representative of Western, normalised beauty standards) irks my feminist self.  Bert Parks, the iconic Miss America emcee between 1955-79 allegedly asserted, in response to a journalist asking what he'd do if a protester were to walk on stage while he was singing his famed theme tune  that he would "grab her by the throat and keep right on singing", sending out a very clear message that one kind of woman deserves adoration and gentlemanly treatment, while another deserves violence.

With that in mind, however...

The show isn't overtly political, rather it addresses my feelings on beauty pageants in a far more surreal, silly - and hopefully subversive - way.

Above all else, it was the codified style of movement - of walking, to be precise - and of smiling, of exuding charm at every possible juncture that grabbed my attention and inspired me to explore the fascinating physical language of pageants.

The subject offers MASSIVE scope for play and subversion and, though I'm hardly the first to utilise it, once I'd begun, that was that.
Posted by Claudia Jefferies at 16:04 No comments: